His Eminence Metropolitan ISAIAH of Denver
Click HERE to learn more about His Eminence.

To view a short video of His Eminence, click below. 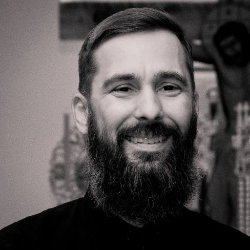 Rev. Fr. R Joseph Collins
Economos
Father Joseph and Presvytera Melanie Collins grew up in Mauston, WI, a rural farm community in central Wisconsin, around an hour north of Madison. Father and Presvytera were married in February 2005, and in June of 2006 received Ty, their oldest child, into the world. One year later they moved to Brookline, MA to attend Hellenic College. Fr. Joseph and Presvytera Melanie were not yet orthodox at the time, but attended a non-denominational Christian church in Wisconsin, pastored by Presvytera’s father. They had no expectation of converting and intended for Father Joseph to earn his bachelor’s degree to facilitate a career as a church history teacher in a Christian school setting. During their first year in Brookline they fell in love with Orthodoxy and were received into the church in the summer of 2008. Their daughter Mikayla was born that spring. Father, Presvytera, Ty, and Mikayla lived in Brookline until the summer of 2013. While there, Father earned both his Bachelor of Arts and Master of Divinity degrees. While enrolled in Hellenic College Father Joseph majored in religious studies and minored in both Greek classics and Russian Literature. Upon graduating in 2013 they moved to Saint Basil Academy in Garrison, NY and served there until June of 2016. While at Saint Basil Academy several major events happened. First, in 2014 their youngest child, J.D., was born. Then, on Evangelismos (the Annunciation), March 25th of 2015, Father Joseph was ordained to the holy diaconate by the hand of His Grace Bishop Andonios of Phasiane at the Church of Our Savior in Rye, NY; where he served on Sundays and major feast days as a deacon until spring of 2016, under the guidance of Fr. Elias Villis. On May 15th, 2016 Father Joseph was ordained to the holy priesthood by the hand of our former Archbishop, Demetrios of America, at the Cathedral of the Holy Trinity in New York, NY. That particular Sunday, by God’s wondrous grace, was the Sunday of the Myrrh Bearing Women, which is also a feast day of Father’s patron saint, Joseph of Arimathea. Beginning in June of 2016 The Collins’ were assigned to the church in Poughkeepsie, NY. A church dedicated to the Kimisis (Dormition) of the Holy Virgin, where they served until now. As a family they are dedicated to the Holy Church of Jesus Christ, to love His church, to care for it, and to grow it by faithfully and fearlessly preaching the Gospel of the crucified and resurrected Lord. As a family they try to, as St. Francis of Assisi said, “preach the gospel at all times, and if necessary, use words.” Working to live lives exemplary of their Christian faith and values, wanting to be beacons of faith and love in all that they do and say.

Use the form below to send a message to Rev. Fr. R Joseph Collins. 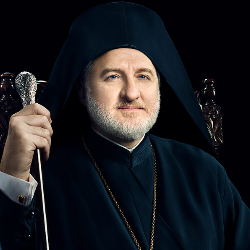 His Eminence Archbishop Elpidophoros
Archbishop of America
His Eminence Archbishop Elpidophoros (Lambriniadis) of America, Most Honorable Exarch of the Atlantic and Pacific Oceans, is the eighth Archbishop of America elected since the establishment of the Greek Orthodox Archdiocese in 1922. Archbishop Elpidophoros was born in 1967 in Bakirköy, Istanbul. He studied at the Aristotle University of Thessaloniki — School of Pastoral and Social Theology, from which he graduated in 1991. In 1993, he finished his postgraduate studies at the Philosophical School of the University of Bonn, Germany, submitting a dissertation entitled, “The Brothers Nicholas and John Mesarites: Defenders of Orthodoxy in the Union Negotiations from 1204 to 1214 (in the historical and theological framework of the era).” He was ordained a Deacon in 1994 at the Patriarchal Cathedral and was thereafter appointed as the Codecographer of the Holy and Sacred Synod of the Ecumenical Patriarchate. In 1995, he was appointed Deputy Secretary of the Holy and Sacred Synod. From 1996-1997 he studied at the Theological School of St. John the Damascene in Balamand, Lebanon, where he improved his knowledge of the Arabic language. In 2001, he presented his doctoral dissertation at the Theological School of the Aristotle University of Thessaloniki under the title, “The Opposing Stance of Severus of Antioch at the Council of Chalcedon,” earning him a Doctorate of Theology with highest distinction. In 2004, he was invited to Holy Cross Greek Orthodox School of Theology in Brookline, MA, where he taught as a visiting professor for one semester. In March 2005, at the proposal of His All Holiness Ecumenical Patriarch Bartholomew, he was promoted by the Holy and Sacred Synod to the position of Chief Secretary and was ordained to the priesthood by the Ecumenical Patriarch in the Patriarchal Cathedral. In 2009, he submitted two dissertations to the Aristotle University of Thessaloniki — School of Pastoral and Social Theology and was unanimously elected Assistant Professor of Symbolics, Inter-Orthodox Relations and the Ecumenical Movement. The dissertations are entitled: “The Synaxes of the Hierarchy of the Ecumenical Throne (1951-2004)” and “Luther’s Ninety-Five Theses: Historical and Theological Aspects. Text – Translation – Commentary.” In 2018, he was elected full professor at the same university, a position he held until his election as Archbishop of America. In March 2011, he was elected Metropolitan of Bursa, and in August of the same year was appointed Abbot of the Holy Patriarchal and Stavropegial Monastery of the Holy Trinity on the island of Halki. He has served as the Orthodox Secretary of the Joint International Commission for the Theological Dialogue between the Orthodox Church and the Lutheran World Federation and as a member of the Patriarchal delegations to the General Assemblies of the Conference of European Churches and the World Council of Churches. He was the Secretary of the Pan-Orthodox Synods in Sofia (1998), Istanbul (2005), Geneva (2006), and Istanbul (2008). He has been an active member of the World Council of Churches serving on its Central Committee and also serving on its Faith and Order Commission since 1996. On May 11, 2019, he was elected Archbishop of America by the Holy and Sacred Synod of the Ecumenical Patriarchate and was enthroned at the Archdiocesan Cathedral of the Holy Trinity in New York City on June 22 of the same year.

Use the form below to send a message to His Eminence Archbishop Elpidophoros. 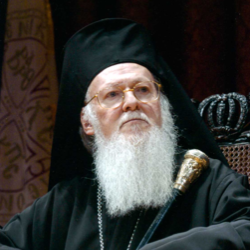 His All Holiness Bartholomew
Ecumenical Patriarch
His All Holiness Ecumenical Patriarch Bartholomew is the 270th successor to the Apostle Andrew and spiritual leader of 300 million Orthodox Christians worldwide. Since ascending the Ecumenical Throne on November 2nd, 1991, he has tirelessly pursued the vision of his enthronement message spiritual revival, Orthodox unity, Christian reconciliation, interfaith tolerance and coexistence, protection of the environment and a world united in peace, justice, solidarity and love.

Use the form below to send a message to His All Holiness Bartholomew .